What are the functions of the New Zealand Central Authority for Mutual Assistance?

In practice formal requests for mutual assistance are received by, and prepared by, the Crown Law Office on behalf of the Attorney-General. Within the Criminal Team at Crown Law, specially trained counsel prepare outgoing requests and assess incoming requests. The request is then referred to the Deputy Solicitor-General (Criminal Team) who, pursuant to delegations from the Attorney-General, consents to the request being actioned or sent. 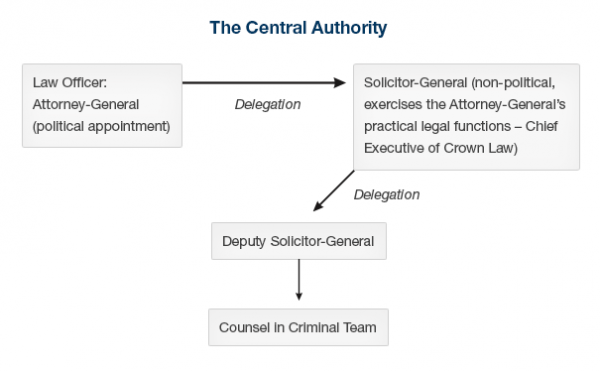 What are the functions of a Foreign Central Authority on receipt of a request from New Zealand?

Difficulties for the timely facilitation of mutual assistance requests can occur when agencies in the country to which a request is made do not communicate well with one other. This can lead to delays and, in some cases, information being obtained by (for example) the police in the foreign country but never actually being transmitted via the Foreign Central Authority to New Zealand. It is helpful if the Foreign Central Authority is able to take a supervisory role in ensuring that a mutual assistance request does not get held up or lost as it is passed between agencies.

New Zealand’s approach is to aim for a respectful and careful balance between initial informal approaches (if necessary) followed up by the issuance of a formal and compliant mutual assistance request.

Any evidence that is sought to be admitted in criminal proceedings in New Zealand is subject to the general rules of admissibility. There are many bases on which defence counsel can challenge evidence in general and especially evidence which is obtained from overseas. For this reason New Zealand requests for obtaining evidence usually involve detailed and often lengthy procedures that we request the foreign country to follow. While we appreciate that this can seem very burdensome, it is also critically important. Counsel in the Crown Law Office are happy to discuss any problems the foreign country has in actioning our requests.

The adversarial system in New Zealand is underpinned by a strong preference for witnesses in criminal proceedings to appear in person so they can be cross-examined. This is one reason why the next best thing to an actual witness may be video-link evidence. It is also why having already interviewed a witness in a foreign country, or taken their statement, New Zealand will often need to make a further request for that witness to (a) attend in person, (b) give evidence by video-link, or (c) provide an affidavit (statement on oath requiring compliance with additional legal formalities).

Because of the importance of personal attendance, New Zealand requests will frequently need to do more than simply request that the foreign country ask the witness to attend Court in New Zealand. We will commonly also ask that the importance of the request and the need for personal attendance be explained, and that the specific assurances and guarantees relating to the witness’ time in New Zealand are explained in an effort to encourage their attendance. It is accepted that attendance is on an entirely voluntary basis.

How are incoming requests dealt with?

Incoming requests often come through diplomatic channels, via the Ministry of Foreign Affairs and Trade. Requests sometimes arrive through Interpol, or are sent directly to the Crown Law Office. Once the request arrives at the Crown Law Office, a lawyer in the Criminal Law team assesses the request for compliance with the requirements of MACMA. Often, some further information is required from the country that is making the request, so the lawyer dealing with the file will liaise with the requesting country to obtain the necessary information.

How are outgoing requests dealt with?

It is important to note that Courts exercising criminal jurisdiction in New Zealand cannot issue letters of request to foreign countries.

Most outgoing requests are sent to the foreign country through diplomatic channels. Where the request is to a country with which New Zealand frequently engages in mutual assistance, requests may be sent directly by international courier and faxed or emailed.

In New Zealand’s experience, the following matters should be checked by the Foreign Central Authority when making the request.